The murder of nine black church goers by Dylan Roof was an act of incomprehensible savagery. Since the event, there has been much discussion, the removal of the Confederate flag from South Carolina Statehouse and the President has broken out in song. I often feel averse to thinking about events such as these in any sort of context. Whether in Paris, Tunis or an American high-school; the blood-curdling insanity of those that murder innocent people warrants little explanation beyond the mental health of the perpetrator. Just as worrying, are the policy makers that would use such events to justify the introduction of a new legislation… as if murder wasn’t illegal in the first place. Politicians must learn that what transpired in Charleston June 19th doesn’t require an action of any kind, only sombre reflection alongside the swift incarceration of the culprit.


Many will assume that Dylan Roof’s actions are representative of a broad recent trend in American politics, that of a ‘race crisis’; linking Ferguson, Baltimore, New York, Sanford and now Charleston. In a sense these events are connected, race in the USA is in many ways like class here in the UK; always pervasive, and at times palpable. For better or worse, rightly or wrongly the narrative of racial conflict is a powerful force in American society.

Dylan Roof’s ideology, outlined in his manifesto is identity politics pushed to its fullest  most aggressive and dogmatic extent. A criticism of white supremacist thinking isn’t necessary here, the concept that we are in the midst of a ‘race war’ is ridiculous enough. Roof’s supposed obsession with the Japanese film Himzu, and the need for the violent purification of society reeks of Julius Evola. Furthermore, his infamous manifesto reads like a desperate plea for help, a painful and frustrated incomprehension of the modern world. I find it hard to believe that the man who wrote it had ever discussed his ideas openly; the short document presented me with one of the bleakest understandings of society I have ever seen.  Existing far-right groups online and the KKK have been keen to distance themselves from the murders in Charleston. Although I find it hard to believe that the members of such organisations universally condemn Roof’s actions.

The outrageous assault reminds us in Europe of the Anders Behring Breivik shootings in Norway 2011. Again, a deranged right-wing madman killed scores of innocent people, in the name of a sickening Fascist ideology. Yet, in light of these events I think it is appropriate to make a point about the nature of politics in our modern and complex societies. Arguably once political discourse becomes about identity and not ideas, we head down a dangerous path. Some may find that statement hard to stomach. There are those for whom, ethnicity, class, place of birth or skin colour is the foundation of their ideology. ‘Identity Politics’ has been with us for centuries; it is what happens when genuine politics and social philosophies have failed.

When I heard about the news and the controversy surrounding the confederate flag, my partner (not a Libertarian) exclaimed: “I don’t understand how people can think that the confederate flag isn’t offensive to black people!” She then turned to me and said “I bet you don’t think it should be banned”, to which I replied “No I don’t… but I still think its offensive. I certainly wouldn’t hang the confederate flag outside my own  house.” However, there are undoubtedly many people in the USA who don’t think that the famous ‘Stars & Bars’ is a symbol of racial oppression, merely an obstinate allusion to the cultural, linguistic and culinary tradition of the American Deep South. Yet I think we can all agree that the confederate flag has become a divisive issue and a powerful symbol, as to what it represents, I will leave you to decide.

It goes without saying that my deepest sympathies go to the families of those killed in Charleston. I also feel obliged to add here that at times I have been made to feel dreadfully uncomfortable when I read things some ‘Libertarians’ have said about race and ethnicity. Unfortunately, there can’t be any inspirational message behind this article, but as I alluded to earlier, in the wake of the events in South Carolina, a moment of reflection might be appropriate.

A copy of Dylan Roof’s manifesto can be found here: http://lastrhodesian.com/data/documents/rtf88.txt 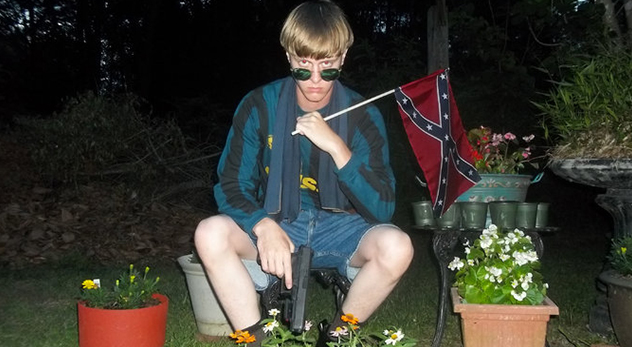