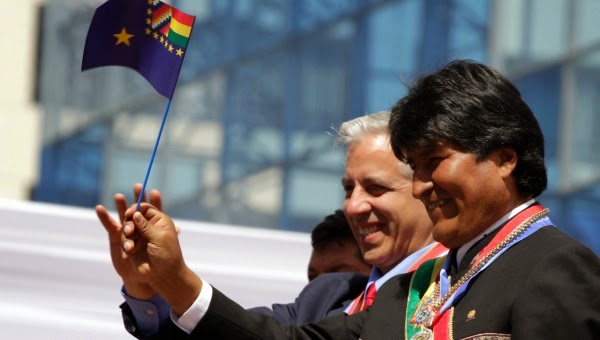 Bolivia's president Evo Morales won his third term in office, having one of the highest approval ratings of any world leader. Far from being an isolated case, the mass appeal of Mr. Morales is symbolic of a left wing consensus across most of South America. Otherwise known as the 'Pink Tide'. The importance of this continental shift towards the left cannot be denied. Here in 'The West' socialism has ceased to be a feature of our vernacular when discussing everyday politics. A dream of  a bygone age, only to be seen in the crumbling relics of our civil institutions and read about in the pages of left wing academics. It is worth mentioning here that the most striking feature of mass political unrest across Europe since 2008 has been the lack of any discernible Marxist vanguard. Instead most disgruntled Europeans (including us in the UK) are turning towards popular nationalism. Even the way we talk about politics has changed, the traditional left/ right paradigm is
collapsing under the weight of its own inadequacy.

The lands between the Rio Grande and the Tierra Del Fuego have traditionally been the stronghold of Marxist academics. Perhaps unlike any other place on earth, South America's historical narrative has been shaped to emulate an arena for a bitter class war. Latin America's history has been perceived as ripe and ready for the journey towards Utopia. If the Revolution is to have a vanguard, they speaks Spanish. After over half a century of communist rule Cuba remains a defiant bastion of collectivism. Despite mass protests, a skydiving economy and the death of its cherished leader Venezuelans under Nicolas Maduro show no signs of discarding the United Socialist Party  just yet. And in Brazil's recent presidential elections the three main candidates where Social Democrats. Latin America's most famous liberalising programme was initiated under the iron fist of general Pinochet with the help of his hated 'Chicago Boys'. So the election in Bolivia is surely another nail in the coffin for Capitalism in South America. It is this claim that I will be addressing here.

On Sunday Evo Morales won 60% of his countries vote, a landslide. His nearest opponent Samuel Doria Medina a wealthy entrepreneur received a disappointing 25%. It goes without saying that compared to British standards where leaders struggle to achieve an approval rating higher than 30%, Mr Morales' popularity in his country of 10 millions is astronomic. Ravaged  by decades of neo-liberal authoritarianism Bolivia's first Aymara president has brought about a much appreciated sense of stability to one of Latin Americas poorest countries.

Historically Bolivia has been a divided country with its traditional  economic center being in the western lowlands ( the Medialuna). However Morales' popularity originates from his supporters from Bolivia's indigenous communities in the Andes, poor labourers in Santa Cruz department and La Paz. Clearly Morales' ability to coordinate these often ignored and repressed groups in Bolivian society has been the key to his success. Yet Morales' presidency hasn't been without opposition. In 2007 ex-president Reyes Villa attempted to resist Movement  for Socialism's (MAS) plans to redesign Bolivia's constitution and sparked disgust and rioting from MAS supporters when he and his allies tried to hamper Morales' government. Reyes Villa has since fled the country.

However his 60% landslide wasn't the victory Morales was hoping for. His supporters were eager for the ex coca leaf grower to run for a third term in office at the next election, something that is prohibited under the Bolivian constitution. Unfortunately for the president he failed  to receive the 66% of the vote needed to make an amendment to this existing law. Perhaps slightly disapointing for the hugely popular president. Although the election result and Morales' reaction to it speaks volumes about the reson behind his appeal. Ultimately it is the stability that he has brought to a vehemently divided country that makes him so popular. Morales' fiery anti-western rhetoric has predictably won him the title of 'despot' amongst western leaders. Yet the fact that in a country ( indeed a region) with a long history of dictatorship he simply accepts this election result and prepares to move on speaks volumes about why he is so universally popular in Bolivia. It is this sober, cautious dynamic about Bolivia's revolution that we proceed to assess.

Socialism in the Twenty First Century?

Undoubtedly it is Morales' confidently anti-capitalist oratory that wins him a place at the seething heart of Latin America's Pink Tide. Morales has spoken before about how capitalism has destroyed Pachamama ( the earth). Indeed to many observers Bolivia's newly re-distributive economic system will raise this impoverished nation into the ranks of the 'first world' in a matter of decades. And the statistics seem to bore this out. Since MAS ascended into power in 2006 Bolivia has undergone an economic boom. With 5% GDP growth annually, a 10% decrease in the number of people living in poverty and a domestic consumer boom with supermarket sales increasing 529% and Restaurant sales increasing 686%. This economic boom has led to a massive investment in infrastructure in Bolivia.

Arguably this is evidence that Bolivia's leftist government is finally ridding the country of the poverty that has plagued its history. However the reality of Bolivia's economic miricle is more sobering. Morales' resource nationalisation programme of oil and natural gas is largely responsible for Bolivias recent success. Its no coincidence that MAS' successful wealth distribution programme coincides with a corresponding rise in the price of oil worldwide. Similarly the stubbornly high price of natural gas seems to be helping to fill Bolivias coffers. Furthermore under the stewardship of finance minister Luis Arce natural gas and oil have increased from 10% of Bolivia's economy to over a third, additionaly one of MAS' most notable moves has been to enable Bolivian government bonds to be sold abroad for the first time in just under a century.

Clearly underneath the revolutionary edifice lies a calculated and relatively mundane economic formula. Gonzalo Chavez, a Bolivian economist has criticised Arce's policy, claiming that Bolivia's success relies too heavily on primary resource extraction. He says that the country is at serious risk if there is a shift in global commodity prices. Undoubtedly it is fortunate for Morales that oil and gas prices are high. However according to the World Bank, Bolivia's unusually high growth rate is set to slow down dramatically over the next five years

One of the most striking features of the Sunday election was Morales' triumph over traditional opponents in the rich lowlands of the Medialuna. Including the large agribusiness state of Santa Cruz. Corporate leaders have praised Morales' policies for keeping the economy stable; in stark contrast to other socialist run countries in Latin America. Morales even received a fairly positive write up in the Wall Street Journal. Although Morales' new friends have left some of his traditional supporters with a bitter taste in their mouths. Indigenous environmentalists, a core part of MAS' support network have denounced  plans to construct a highway through unspoiled nature reserves. Furthermore, a big part of MAS' appeal is their implicit promise not to nationalise any more industries. However in the immediate future it looks likely that Morales' supporters will encourage their idol to go beyond oil and gas.

Ultimately the reality of Morales' Bolivia is a more somber mix of cool headed nationalisation and redistribution policies; a far cry from revolution. Certainly not 'proof that Socialism doesn't damage economies' as was argued by Ellie Mae O'Hagen in The Guardian this week. Yet it would also be wrong to condemn Morales' regime as adamantly as some media outlets have done. The Financial press have been keen to characterise Bolivia as riding a commodities boom that is ultimately unsustainable in the long run. A scathing analysis indeed.


However Bolivia's latest election has proven that for many in Latin America 'capitalism' and 'liberalisation' are by-words for dictatorship and oppression. In this respect I would agree with them. What many leaders in the western world call capitalism is a monstrously deformed and destructive entity, wholly unworthy of the name. The lasting legacy of Evo Morales will be his legacy to Bolivian politics, not its economy. It doesn't look like Morales' regime is going to collapse anytime soon, Hugo Chavez's sudden succession by Nicolas Maduro has shown that Pink Tide governments can be extremely resilient to implosion. Evo Morales' successor will inherit a relatively stable country that has made strides towards being a more socially liberal society. Additionally Bolivia's new found confidence has won it friends in Moscow and Beijing. Arguably a significant reason for the emergence of the Pink Tide throughout Latin America is the regions genuine exhaustion with being dominated by the USA, opposing western imperialism is clearly a vote winner in Bolivia. In 2000 a  handful of western backed companies tried to take over Bolivia's water supply causing what many call 'the water war'. It is no coincidence that the mainstay of Morales' programme is his nationalisation policy.

Therefore Bolivia's latest elections prove that sometimes when addressing issues in far away countries we often have the debate we want to have as opposed to the discussion we ought to have. It is wrong to assume that Bolivia is showing the world that 'Socialism works' in much the same way as politicos are ready to condemn Morales as a tyrant in waiting. Until we learn to examine the reality of the developing world the extraneous ideological quarrels will continue.
Posted by Unknown at 11:19